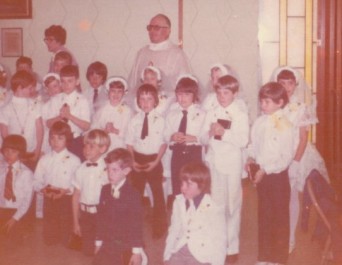 Once upon a time, some of the nice Altar & Rosary Society ladies at Sacred Heart Catholic Church in Melcher, Iowa, pegged me as a future priest.

I’ll pause for those of you who know me to stop laughing.

Anyway, it may have made sense back then. After all, I was an honest-to-goodness altar boy well into my college years. I sang in the church choir and helped freeze ice cream every summer for the church picnic. Both of the priests who served at Sacred Heart during my high school years encouraged me to play football and study for the priesthood at what is now St. Ambrose University in Davenport.

But to a teenage boy, the celibate life of a Catholic priest didn’t sound very appealing. Little did I know back then about how many of those priests were having more sex than I’ve ever had as a married man. OK, so many of them were — well, never mind. Let’s just leave that as a topic for another day.

Back to the priests I knew in high school. They were probably disappointed that I eventually graduated from a college affiliated with the Methodist Church, but I still attended Mass nearly every Sunday morning at Immaculate Conception. Usually with a hangover, I’d plop down in a pew as near to the back as possible. But I went. After all, it was only three blocks from the Morningside College campus in Sioux City, Iowa.

And for many years after college, I attended Mass on most Sunday mornings. In fact, I often joined the church choir wherever I lived. It was a good way to make friends and collect news tips that I often turned into stories in the paper.

But for reasons that even I don’t understand, I stopped going to church regularly five or six years ago. And for the past couple of years I’ve worked on Sunday mornings at a part-time job that has taken on added significance since I lost my full-time job six months ago.

Those past six months have given me plenty of time to think about all of this. Early on, one of my closest friends told me his faith had really helped him a few years ago when he lost his job. “I’m praying for you every day,” he told me recently.

That’s something I’ve heard from many people, including a friend on Facebook, who recently told me: “You haven’t even met some of those people praying for you.”

I am very grateful for their help, because I’m not sure how good I am at praying.

At least that’s what I would have said prior to this morning, when an email and a message on Twitter both made me think God has been listening when I’ve tried to strike up a conversation. In the past few days, I guess you could say I told God whatever happens to me is in His hands. And then I sort of made a proposal: Help me get a good job and I’ll tackle some of the other things I’ve been trying to ignore for too long, including my poor church attendance. The rest are better left between me and God. At least for now.

It’s embarrassing to think I may have needed to lose a job — to which I tied too closely my self-identity for far too long anyway — before I could have that conversation. It’s a good thing God is patient.

But I think I’m beginning to see myself becoming the person I was meant to be. And that gives me a reason for hope on many fronts, including my search for a new job.

3 thoughts on “Good things are going to happen”