Man plans and God laughs, according to an old Yiddish proverb.

And he may laugh once in awhile to humble us when we need it. Or maybe it’s just me.

In the last post published on this blog, on March 18, I wrote about developing the discipline to write here every day. And I’d had a good run: 18 posts in the first 18 days of March, which followed 25 and 26 posts in February and January, respectively.

But that was last Wednesday — the day I went home early from work feeling feverish and a bit nauseous. When I finally took my temperature later that evening, the thermometer said: 101 degrees. Luckily, I only really felt poorly for about two days. But by then, most of the rest of the house had come down with the flu and we’ve been trying to fully recover ever since.

So, here I am, back at Brome Hill. I hope you’ve had a better few days. 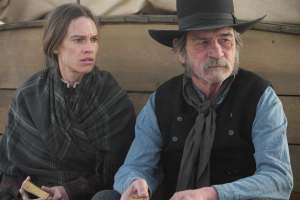 Since I didn’t feel like doing much else on Saturday, I rented and watched The Homesman, a movie produced, directed and co-written by Tommy Lee Jones, who also co-stars with Hilary Swank. The 2014 movie has been called a feminist Western, an anti-Western and even a Midwestern, since it is set in Iowa and the Nebraska territory in the 1850s.

To read reviews of the movie, go here. All I can add are a few observations:

But it’s that second point that will stick with me. Without giving away the entire plot, the movie addresses a subject I’ve wondered about for more than 20 years: How did anyone live in a sod hut and not eventually lose his or her mind?

Early in my newspaper career, I worked for three years as a reporter at the Bismarck Tribune in North Dakota’s Capital City. During one of my first weekends in Bismarck, I spent several hours at the North Dakota Heritage Center, which is on the capital grounds. It was within walking distance of my then-new apartment.

I don’t know if they are still displayed in the museum, but I couldn’t stop reading an exhibit of diary entries written by North Dakotans in the late 19th century, along with letters to and from friends and family in their homelands. The hardships they endured (Would you want to live in a drafty sod hut in a place where the winters are unbearably cold and the summers can be brutally hot?) put into perspective how easy my life was as a new North Dakota. I just had to deal with traffic buzzing by my apartment on nearby Interstate 94. At least my apartment was warm in the winter and cool in the summer. I could shut the windows and shut out the wind that seemed to always blow. I wasn’t trying to earn a living by walking behind an ox, horse or mule pulling a plow.

Those diaries and letters painted a picture I’ve never forgotten of what life must have been like to  homestead in North Dakota. The Homesman depicts the often harsh ways of life on the prairie in Nebraska and Iowa in a movie for all to see.

In related news … While I working on this post, I read of recommended reductions at the State Historical Society of Iowa in response to proposed budget cuts. The changes could threaten the preservation and accessibility of the diaries, letters and other such documents that tell Iowa’s earliest history — the very sort of thing I spent hours reading once upon a time as a new North Dakotan.

I understand budget cuts. But losing this history would be a sad chapter in Iowa history. And it would make future Iowans even more likely to learn their history from movies and other sources that may glorify or romanticize our past instead of depicting it firsthand.