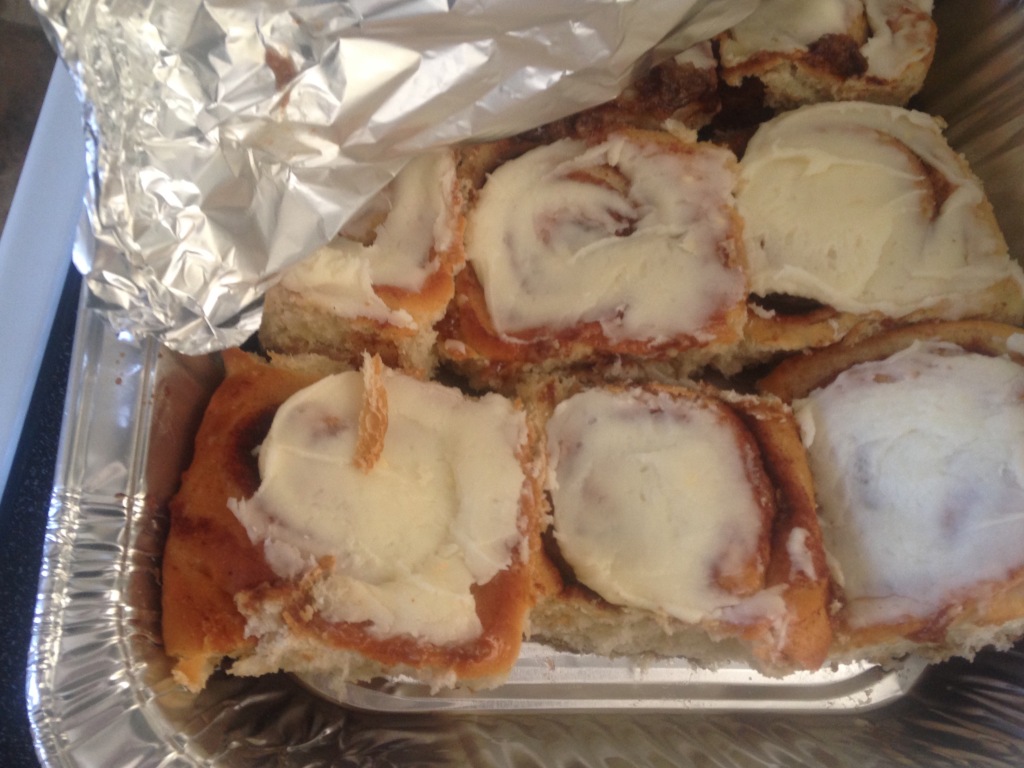 The CHS class of 1985 will have its 30-year reunion on Saturday, Sept. 26, at Carpenter Hall in Chariton, Iowa. It will be held during Homecoming Weekend, which, of course, will include Friday’s assembly, parade and football game against Oskaloosa. The rest of the reunion details are fuzzy, because I volunteered to organize it and I haven’t done much yet. (I’m pretty sure there will be a bicycle ride on that Saturday afternoon — more details to come as the summer progresses.)

But as I think about it this morning, maybe the menu for the reunion should include chili and cinnamon rolls — a meal that, even after all these years, ties us together in a way we wouldn’t have understood when we were kids.

If you go back even further, to when the CHS Class of 1985 was in grade school, the combination of chili and cinnamon rolls ranked as the most popular lunch served in the cafeterias at Van Allen, Columbus, Williamson and Lucas elementary schools. I was reminded of this Friday, when I came home for lunch, ate a bowl of leftover chili and saw cinnamon rolls on the stove that Janet had brought home from a meeting that morning.

I posted a picture of the rolls on Facebook, jarring maybe a few memories for at least some of my former schoolmates. One, who lives now in California, said that his younger sister had fixed chili and cinnamon rolls for lunch on his birthday a few weeks ago. He referred to it as his Williamson-themed birthday party.

But why combine a bowl of chili with a cinnamon roll? And was this a popular combination anywhere else besides Chariton?

I wish I knew. Maybe Frank Myers — a fellow former newspaperman who moved back to Chariton after he retired, where he now writes a fine blog — can root out the story of who first combined these foodstuffs and how and why it happened. As good as it is, today it just strikes me as odd — kind of like eating eggs and apple pie or bacon and Jello salad. Well, maybe that’s a bad analogy because everything is better with bacon.

Still, I can’t help but wonder: Is the combination of chili and cinnamon rolls still a popular school lunch in Chariton? I don’t know. All I know is how popular this lunch was in the 1970s and ’80s.

To our children — and, maybe even in some instances, our grandchildren — life in Chariton back then would seem pretty slow. There were no fast-food restaurants in Chariton until a Hardee’s and a Pizza Hut opened in my last years of high school. There still isn’t a McDonald’s or many of the other fast-food places often lined up alongside the major highways of nearly every other city and town.

This may have been one of the reasons more of my friends and I ate school lunch even as high school students — we didn’t have as many choices outside of school as young people have where I live now. Nor did we have as many choices in the school cafeteria as are offered today at many schools.

So we ate whatever the school cooks served up on any given day. Oddly, I don’t really remember any of the meal combinations except for chili and cinnamon rolls. But that’s one I’ll never forget.

4 thoughts on “Fusion cooking in a 1970s school cafeteria”