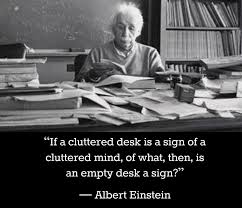 Stop the snickering. What you’re thinking is obvious, because, yeah, I’m no genius. But that’s not what I meant by claiming not to be an Einstein.

Perhaps you are familiar with this Einstein quote about his cluttered desk. It appears to relegate me to the Empty Mind Club because a cluttered desk has always bugged me — at least it does when it’s mine.

In my past life as a newspaperman, this made me a bit of a freak. One of the first publishers for whom I worked was also a big fan of clean desks. Of course, he viewed the newsroom with disdain because of the piles of junk on virtually every flat surface in the room. In response, he started a weekly inspection, promising to give a silver dollar to anyone whose desk was clean every Friday. Not many of my colleagues ever claimed a buck and the inspections quickly stopped.

Who knows what happened to that publisher, but I could have earned one of his silver dollars Tuesday. It didn’t start out that way. I pulled open the file drawer in my desk, only to have the folder furthest in the back get hung up and then fall behind the backside of the drawer. Of course, the drawer then wouldn’t fully close. 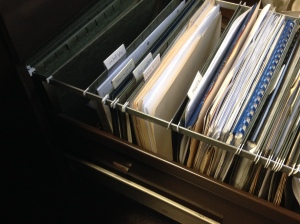 No big deal, I figured. I could learn to live with the drawer not quite shut. Until the first time I turned to the right and banged my knee. But being unable to reach the obstruction in the deepest reaches of the desk’s guts meant I would have to remove the drawer — and all of the files that were in it.

This made a big mess. For all I know, Einstein would have loved it. But not me and I spent part of the afternoon going through the files, shredding what I didn’t need, scanning some documents to keep them electronically and then putting what was left back in the desk.

Instead of stopping there, I looked around and saw the stacks on the credenza, so I tackled them.

Someday I will need to clean the other drawers in my desk. But it already looks much better even though saying so may mean I have an empty mind.

Einstein, who has been dead for nearly 60 years, won’t care. And neither do I if that’s what someone wants to think just because my desktop is clean.