I just stumbled across it a few days ago. But alert readers might notice that mine is one of the common Lucas County surnames to which Frank refers:

… Steinbachs, with only two syllables, one of them a straightforward “Stein,” isn’t quite as complex. We’ve always pronounced that one “STEIN-baw.” But an increasing number of Steinbachs are now pronouncing it “STEIN-bok” …

... The difficulty is that the “ch” at the end of a word in German (this is about all I remember after four semesters of college-level German) is not pronounced as a hard “k,” as we’ve become accustomed to hearing in this country every time that composer guy, J.S. Bach, is mentioned. Instead it’s a very soft “ch,” almost as in “loch,” occasionally almost inaudible.

It’s just not a sound us speakers of English are accustomed to making, so by the second generation in this country, English-speaking children of emigrants had modified the original pronunciations of all these names in varying ways.

Boy, did they ever …

Frank is more of a historian than I ever will be. And I have nothing on which to base this assumption. My great-grandfather came to this country from Germany in the 1890s. My grandfather — who, to the best of my knowledge, doesn’t speak a word of German — was born in the years just before the United States entered World War I. It was a time in U.S. history when there was at least some anti-German sentiment in this country and I’ve often wondered if that had anything to do with the pronunciation of my last name in my hometown. If Frank reads this, maybe he will set me straight.

Anyway, since my college years, I’ve been in the Stein-bok camp. My first paid job in journalism was as a part-time reporter/anchor at KMNS/KSEZ radio in Sioux City, Iowa. The first time my new boss, news director John Bentzinger, introduced me on the air, he pronounced my name as Stein-bok. It’s been that way ever since.

But it wasn’t always so and Frank is absolutely correct. In Chariton, I was — and probably still am — known as Chris Stein-baw. Well, I might still be known as Moose, but that’s a story for another day. 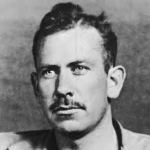 Both spellings and pronunciations of my surname are varied: Steinbaugh, Steinback, Steinbock, Steinbeck.  Many times, I’ve been asked about my connection to famous American writer John Steinback. Sadly, we are not related to each other. Although, as I think about it, he probably doesn’t care, especially since he has been dead for 45 years.

Maybe the all-time best misspelling of my last name was on a T-shirt I had made in high school: Steinach. Somehow, I didn’t notice the missing B until I got all the way home from Iowa City with that T-shirt — an early example of the pain in the butt that typos would create for much of my life.

As for my friend, Frank, he says his daddy pronounced it STEIN-baw and that’s that. “I’m not giving an inch,” he said.

It doesn’t really matter to me. I’ll asnwer to all variations of my last name. In fact, if it will make it easier, just call me Chris.