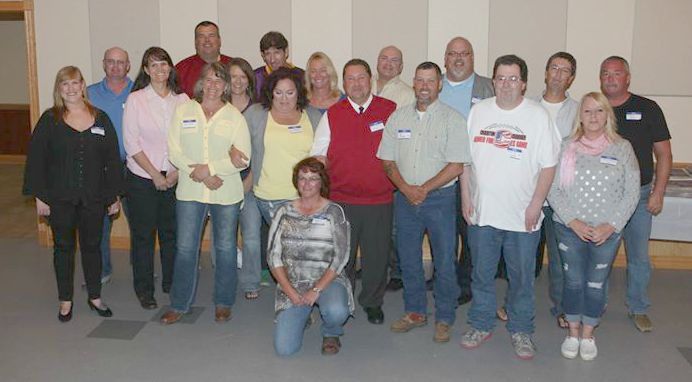 In the end, about one person attended for every year it’s been since our graduation from Chariton High School 30 years ago.

By my count, 28 people showed up at Carpenter Hall in Chariton to represent the CHS Class of 1985. The group photo shows 17 classmates plus one from the Class of 1986. Check that, Mark McVey, Classmate No. 18, took the photo and refused to get in front of his camera.

Significant others made up the rest of the crowd, along with a few members from the class of 1984 and 1986. I’m grateful they all came and that we shared an evening of telling stories and sharing pictures of kids — and grandchildren. (And I have to ask: Just how in the world did that happen so fast?)

The last of us hung in until the evening ended sometime after 11, maybe two hours after many of us had started trying to stifle yawns. I won’t speak for everyone, but my guess is that most of the group will show up again in five years — or whenever we decide to meet again.

I want to touch on future reunions, but first here are a few random thoughts about last night:

In the future, it would be great to see a greater turnout. The CHS classes of 1970 and ’75 held reunions in the same place and at the same time as us. They had much larger crowds. My new favorite person is the member of the Class of 1970 who referred to us as the youngsters as we waited together in the buffet line.

By my count of the portraits in our senior yearbook, we had 96 classmates. That means not quite a fifth of us joined in last night’s fun. It wasn’t overly publicized, so some were probably unaware. I heard from others who couldn’t make it because of work or personal commitments. Others may have other reasons of their own for staying away.

What I hope is that no one stayed away because they think they’ve gained too much weight or aren’t pretty enough or haven’t made enough money or fill in the blank here. I won’t try to speak for anyone else, but none of those things really matter. And I’m genuinely happy about having had a chance to catch up and visit with everyone who was there.  I’m looking forward to doing it again in five years or whenever we decide to get together again.

For what it’s worth, this blog post is dedicated to Hardie, who asked when I planned to get off my lazy butt and start blogging again.