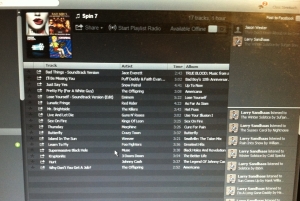 It seems as if I should share my thoughts about the school shootings in Connecticut.

But it’s such an unimaginable tragedy that I don’t know what to say. And so many others have already had much to say — not all of it good. But I was moved today by a friend’s blog post, along with this blog by Liza Long, which has been republished by many websites.

Maybe like some of you, in times like this, I often seem to distract myself by thinking of other things. At 1 p.m. on winter Sundays, that distraction is mercifully easy to find in the cycling room at the Muscatine Community Y. So I rode today with two of the regulars, Don and Jeanne. I am so glad they showed up.

We climbed hills for 45 mostly uninterrupted minutes. It was a good workout and a good ride — at least as good as it can be when you’re riding a bike indoors. I worked up a good sweat.

As we rode, I thought about Spotify. Yes, it seems trivial given what happened Friday in Newtown, Conn. And, as I said, I was trying to occupy my mind with other thoughts.

According to Wikipedia, Spotify is a Swedish music streaming service offering digitally restricted streaming of selected music from a range of major and independent record labels.

If you ask me, it may be the greatest thing on the Internet. Spotify has introduced me to bands such as The Offspring, a punk rock band from California that has been around since 1984, but is sadly new to me. All I can say is: You can’t listen to Johnny Cash all the time.

Anyway, I have been listening to Americana, which was The Offspring’s fifth studio album. It was only released 14 years ago and included Pretty Fly (For a White Guy), which peaked at No. 53 on the U.S. charts and at No. 5 on the U.S. Billboard Hot Mainstream Rock Tracks, according to Wikipedia.

The fact that I still listen to a lot of the music I listened to in the 1980s and 90s gave a 20-something-year-old friend a great opportunity to zing me a week or so ago. And he hit it out of the park, too.

But that’s OK. What he doesn’t know yet is that in 15 years he’ll still be listening to stuff like this.

And I’ll take Garth over Guetta any day.

Back to the Connecticut shootings: I’m not a parent. I’ve never personally experienced this kind of tragedy. And I don’t know everything that happened Friday.

All I can think to say is:

We may never know why Adam Lanza committed such a horrendous act. And I don’t think we’re supposed to understand it. As a nation, I just hope we can quit shouting at each other about it long enough to learn from it. Maybe, then, we could finally make sure it doesn’t keep happening again and again and again.

2 thoughts on “Going well beyond Garth”