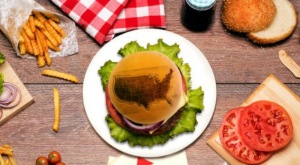 Someone should introduce the hipsters at thrilllist.com to The Papa Burger.

An old canon of journalism states: If your mother says she loves you, verify it. That ethos, along with knowing about The Papa, casts doubt on The Best Burgers in Every State in America, as compiled by thrilllist, a really great website that says it’s “obsessed with everything that’s worth caring about in food, drink, and travel.”

My beef, so to speak, with this list is that for it to be believable, I’d have to verify it. In other words, I’d have to be able to eat every burger made in every state in order to know if thrillist got it right. At a minimum, I’d have to believe that thrillist did this.

Well, for example, take the burger it cited as the best in Iowa and what the website had to say about it.

First of all, the link provided for more information about Short’s Burgers & Shine in Iowa City doesn’t work. And, based on the other hamburgers cited in Iowa as contenders — one made in Des Moines; the second made in Dexter, which is 30-some miles from Des Moines; and the third made in Coon Rapids, which is 70-some miles from Des Moines — the writers didn’t venture far. Are we to believe there are no contenders in Sioux City or Dubuque or even Hamburg, in Iowa’s far southwest corner?

Also, thrillist points out that its best burger in Iowa is made with black Angus beef raised by a local Iowa farmer.

It’s the old Angus myth, and perhaps the best bit of marketing ever in the history of modern agriculture. But that’s all it is, because once the black hide is removed, what’s left looks — and tastes — just like cattle that  previously were white, red, brown or striped. Angus is no better than any other breed of cattle just because it’s black. It’d be like saying red cars are the fastest because of their color.

Finally, I was left scratching my head, because the writer says of the winning burger: “We always order the simple cheeseburger and sub out the cheddar for American on our yearly pilgrimage to Iowa. Then we go to the Vine. ”

So why not just go to the Vine? It also has good hamburgers, wings and lots of other stuff. And it’s more the kind of place where Iowans — and least those who aren’t trying to be hipsters — hang out.

Places like the Williamson Tavern, purveyor of The Papa Burger. At some point when I was a boy, Monte Hutchins, a mountain of a man if ever there was one, became owner of the tavern in Williamson, an Iowa town of maybe 300 people. Years before anyone had ever heard of TV shows such as Man Vs. Food, Monte started selling his one-pound Papa Burgers. As I recall, he used to offer to give the burgers to anyone who could eat two of them in one setting, along with two very generous orders of french fries.

This might not be for everyone. And there are places in Iowa with fancier burgers made with exotic cheeses and other ingredients that might be hard to find in Williamson. But I ate my first Papa Burger when I was but a boy growing up in Lucas County, so it will always rank high on my list. No one will ever convince me otherwise.

I also look at it this way: The Williamson Tavern is still open. It’s one of the few business in Williamson. Its current owners still sell plenty of Papa Burgers. And if you’re the owner of a business that has been open for somewhere in the neighborhood of 40 years in a little burg like Williamson, you must be doing something right. Even if the crew at thrilllist has never heard of you.

One thought on “Give me a Papa Burger”