Nearly two years ago, I wrote about my part-time job running what my friends have called the Zamboni. It’s actually the machine that sweeps and cleans the floors at the Menard’s store in Muscatine.

At the time I last wrote about this, I:

Originally, I started the part-time job as a way to make extra money to pay for my bicycling habit. But it became a lifeline in the weeks after I was downsized out of a job in 2012. It felt good just to have a job to go to — even if it only was on Saturdays and Sundays.

But I worked my last shift Sunday. To make a long story short, I’m tired of working seven days a week. I’m tired of getting up at 4 a.m. on Saturdays in order to make it to work by 5. 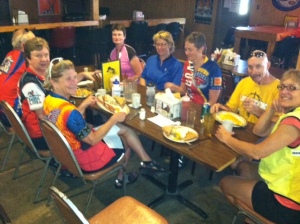 Also, there are other things I want to do on Saturday and Sunday mornings. For starters, I’ve missed a lot of group bike rides in the past three or four years. I’m looking forward to riding again for breakfast with at least some of these people. I hope they’ll welcome me back.

And every once in a while, it might be kind of nice to just sleep in — something I’ve never been good at and don’t do often. Maybe I can learn to do that while I also learn to live without the little bit of extra money I made by driving the Zamboni.

All of that being said, though, I want to be very clear: I liked working at Menard’s. I liked the people I worked with and for. They work hard. They are good people. I will miss seeing them as I drove around in circles in the store.