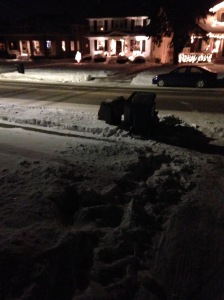 The Whites, Keep On the Sunny Side

from the O Brother, Where Art Thou? soundtrack

The cover of darkness sometimes may help hide some of life’s embarrassment, making it easier to see the sunny side of things.

At least that’s what I told myself from a position flat on my back at the end of the driveway.

This story began Monday, when it started snowing. By the time it finished early Tuesday, we had somewhere in the neighborhood of six inches, which I dutifully cleared from the drive. But the drive is old and uneven, which makes it a challenge to shovel. It also has a bit of an incline. So the snow that I missed on the steep and uneven part of the drive was packed down pretty good and had become slick by Wednesday night, when it was time to take out the trash and recycling.

And keep in mind there was much to carry to the curb because of the holidays and my having forgotten to take out the recycling once in the past few weeks, so this meant making multiple trips up and down the drive.

I got home around 7 p.m. It was cold. But I was already outside and dressed for the cold, so I decided to deal with the trash — which would be picked up around 5 the next morning — before going inside for supper.

The first trip went well. On the return, I realized it was a bit slick walking up the drive.

The second trip was uneventful. It wasn’t until the third trip, when I slid to the end of the drive, but remained upright, that I made a mental note to be careful on the fourth and final trip.

About this all I can say is I should pay better attention to myself. As I carried to the curb the last large cardboard box, my left foot slipped and headed for a higher position — one somewhere above my head.

The next thing I know, I’m flat on the ground with both feet in the air, the cardboard box now empty at my side and its holiday detritus blowing around at the end of the drive.  At first I stood up and looked around to see if anyone had been watching or if a neighbor had bothered to judge the gracefulness of my fall the way someone would score an Olympic gymnast.

After all, I really did stick the landing.

As I started to think about all of this, I got up, picked up the mess, took a photo of the large dent I left in the fallen snow and headed back up the drive and inside for the night.

The bright side is no one saw what happened on this cold and dark night. At least I don’t think anyone did.

The brighter side is that I escaped unharmed so that I can someday fall again.

One thought on “A not-so-beautiful snow fall”