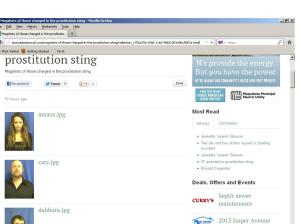 The evolution has begun, but it will take time.

Thursday, I was very happy to write about the new career — my first full-time non-newspaper job — that I will begin Monday at Muscatine Center for Social Action.

To paraphrase the late legendary broadcaster Paul Harvey, here is some more of the story …

As it turns out, Muscatine County Attorney Alan Ostergren was in the middle of a prostitution sting Wednesday and Thursday that involved a coalition of local, state and federal law-enforcement officials. Friday, Ostergren announced the arrest of 27 people.

It goes without saying, this is something in my old life I would have found exciting — pun intended. And I did anyway for a few minutes, but I’m getting ahead of myself.

Thursday, after I blogged about my new job, I represented my new employer at a Greater Muscatine Chamber of Commerce & Industry Business After Hours event at the Clarion Hotel. It was there that I ran into Sgt. Mike Bailey of the Muscatine County Sheriff’s Office, who was lurking around in the parking lot. To be honest, Bailey seemed a little odd when we said hello. And he told me Friday he had tried to avoid me when he first spotted me.

Since he was in the middle of helping out with a prostitution sting, I can see why Bailey wouldn’t want to waste time shooting the breeze with a washed-up newspaper hack. I’m just grateful he didn’t try to arrest me. But the fact that I didn’t even think to ask him what he was doing is a sign I am ready to move on in my professional life.

And that is important. In the past eight months, I interviewed for many jobs — some of them two or three times. In every interview, I was asked if I thought it would be hard to make the transition from reporter and editor to something else.I’ll always be a newsman in my heart. To say otherwise would be to lie to myself. But the next chapter in this story shows that I am evolving.

Friday afternoon, Ostergren posted a news release about the arrests on his blog, which he then linked to on his Facebook page. If this had happened eight months ago, I would have stopped whatever I was doing and made sure this got reported online ASAP. And I still almost did anyway. I called and left a voicemail for Ostergren, asking if he could send me mugshots of the 27 people who had been arrested. You can see them here if you are interested. I then sent out a Tweet and wrote a Facebook post about the arrests and included a link to Ostergren’s blog.

But I didn’t do anything beyond that to report on the arrests and I decided I had better ways to spend Friday afternoon so I didn’t post the 27 mugshots.

A couple of hours later, to its credit, the Muscatine Journal DID post a story and a gallery of the mugshots as breaking news. The staff there will need to do more of this when news happens if the Journal is to succeed in selling subscriptions to its website. And for the record, I am an online subscriber. At least for now. This is another sign of my evolution.

I wish everyone at the Journal well, which wasn’t always the case. I started writing this blog in earnest within days of my job being eliminated at the Journal. It was a traumatic time and I probably should have gone to seek counseling. Instead, I sort of stumbled through it here.

In one of those early posts, “The search for respectable employment begins,” I wrote about it being time to “grow up and seek a real job.”

For most of my adult life, newspapering was so fun it never seemed like work. Filling a front page with my byline was a great thrill even if not everyone else agreed  or understood. Nothing could beat being in the middle of a big story except for maybe representing the Journal every year at the Iowa Newspaper Association awards banquet and bringing home honors by the armload.

But my new job is precisely what I meant by saying it was time to seek respectable employment. Doing things I already know how to do, along with learning to do lots of new stuff — and doing it all to make Muscatine a better place and help people who really need it … what could be more respectable than that?

I can’t wait to start Monday, but first I need to speak to my former colleagues — at least those whom I know read this blog. At least one of them took exception several months ago to my use of the phrase respectable employment.

“Too bad you feel the need to keep running down the industry you worked for for so many years by repeatedly referring to it as not respectable,” this person wrote in an anonymous comment, which I approved and then later removed from this blog.

He or she went on to say some things about my career that are woefully inaccurate. The post also included comments that were likely meant only to upset me, so, in that regard, they were successful. The comments were written and sent from a computer owned by the Journal’s parent company, according to the IP address: IP: 192.104.231.235, 192-104-231-235.rev.lee.net.

There are good people still at the Journal and I wasted too much time being upset with all of them because of one person who wasn’t even brave enough to use his or her name. To all of them, I am sorry for being upset with you. And I’m even sorrier if the things I’ve written hurt you.

I just needed to say that, because the time really has come to move on.