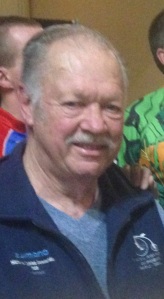 Officials with the Des Moines Register announced Saturday night the route for RAGBRAI XLIII, which will be held July 19-25.

The annual RAGBRAI Route-Announcement Party has become a big deal and a lot of fun in its own right. Saturday night was no exception.There was, however, some disappointment served up with the fun and the free food and beer. For me, the the night progressed as follows:

Fun: Within minutes of finding the table reserved for Team MCSA, someone stopped, said hello and addressed me as “Moose,” which could only mean he was a high school classmate. It was Mark Wilson, a friend since elementary school — one I don’t think I’ve seen in 30 years. It was great to catch up with him and I’m looking forward to meeting him again later on this this year’s ride.

This sort of thing is pretty common. RAGBRAI is like one big small town that rolls across Iowa every summer, so I tend to see many of the same people each year. Saturday was no exception. In addition to Mark, I caught up with my cousin, Jeff Cook of Bondurant, and Joe Edwards, another cyclist and friend since grade school. He was there because he is on the City Council and Chamber of Commerce Board of Directors in Glenwood, where he has lived and owned a business for many years. And he was hoping RAGBRAI would begin this year in Glenwood instead of Sioux City.

More fun: Watching my friend, Charlie Harper, be recognized by RAGBRAI officials for the 49 years he has owned Harper’s Cycling & Fitness in Muscatine and the many years it has been an official RAGBRAI bike shop.

Not-so-much-fun: A group of more than 25 people from Muscatine traveled to Des Moines, including Mayor DeWayne Hopkins, hoping to find out their community would serve as the end point for RAGBRAI XLIII. Alas, Davenport, our neighbor up the Mississippi River, which last hosted RAGBRAI in 2011, was chosen to do it again this year. It will still be a fun ride, but it would be less than truthful to say this wasn’t a disappointment.

Back on the road to fun: Janet and I had a great time going to the party and spending the weekend with Dr. Michael and Shelly Maharry and Rich and Nora Dwyer, members and supporters of Team MCSA last year. We capped off the trip with breakfast Sunday morning at Waveland Cafe West in Booneville, a place picked out by the Maharrys. I recognized it as a place where I stopped to cool off on RAGBRAI XLI in 2013. I liked the place then. And it didn’t disappoint on Sunday for breakfast.

For anyone who doesn’t know, Team MCSA is a group of cyclists organized in 2014 to raise awareness about homelessness in Iowa by going on RAGBRAI while also raising money for MCSA, the nonprofit organization that runs the homeless and domestic violence shelters in Muscatine, Iowa. Coincidentally, MCSA is also where I work — as deputy director — to raise money and publicity for the the organization.

In 2014, 22 cyclists and a four-person support crew joined Team MCSA for RAGBRAI XLII. Now that it’s 2015, we’re looking for new riders to join those who will return from last year.

I’ll be writing much more about Team MCSA in the months to come. If you’re interested in riding with us this year, please contact me for details.