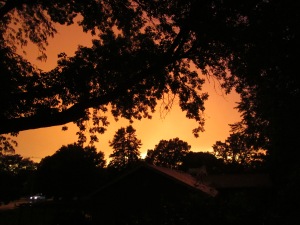 It’s Sunday morning, the perfect time for a poet’s prayer of thanksgiving.

Except for the fact that I’m not really a poet nor an expert at prayer. But there is much for which to be thankful. Take, for example, everything that happened Saturday. It was a nearly perfect day.

It started by waking up before sunrise to a beautiful sight. I got up, made coffee and fixed breakfast: Eggs scrambled with feta cheese and spinach.

While Janet went shopping, I got bicycles ready for the four of us to go on a ride. It turned out to be kind of a short first ride of the season, but:

After the ride, at least a couple of us may have sneaked in a short nap. After I woke up, I headed for the grocery store, where I bought chicken kebabs, twice-baked potatoes, asparagus and pie. I came home and fixed dinner.

Even though Saturday was Pi Day, we skipped the pie and instead headed to the video store and then a local ice cream shop. We came home with the ice cream and watched Gone Girl. a movie I picked that was met with approval.

Like I said, it was a nearly perfect day. In fact, a slightly longer bike ride might have been the only way the day could have been better.

So, I’ll end for today with a real poet’s prayer:

For each new morning with its light, For rest and shelter of the night, For health and food, For love and friends, For everything Thy goodness sends.