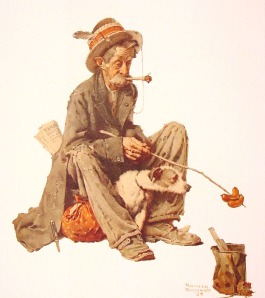 Two days ago I was pushed into an uncertainty the likes of which I would have never been brave enough to leap on my own. Before that, I had been the editor of a daily newspaper for a dozen years. There were stories I wanted reporters to write and ideas in the back of my mind for  columns I wanted to write.

And today none of that is there. At least not for me.

Forgive me for being egocentric, but it seems as if  losing something as fundamental as my job is all anyone has wanted to talk about for the past two days. I have heard from hundreds of people. More encouragement than I could ever hoped to receive.

I’m grateful for it. Because when it ends, I know I will just be another one of the 12.8 million Americans who were counted in January by the federal government as unemployed. Undoubtedly, there are many more who were not counted.

And that leaves me awake in a dark house at odd hours of the morning, worrying that soon I will be forgotten.

I worry that words of encouragement with what sound now like job opportunities in the end will be nice gestures from nice people who didn’t know what else to say. Nice people who by this time next week will have moved on to the hundreds of daily tasks that occupy their time and no longer fill up my day. And they won’t have time for me.

Don’t worry. I’m not as depressed as this sounds. But it’s all very unfamiliar when you’re someone who has worked virtually every day for 30 years. And it’s scary as hell.

I wouldn’t wish for any of this to happen to anyone  — not even the  people who still have jobs even though their past decisions led to the decision announced Monday that many kind people have told me they think was very bad.

12 thoughts on “In the wee small hours”